Tall and cool: Lessons in architecture from a vertical icon

Visit the historic French city of Marseille and you’re immediately struck by two things. Firstly, this is a city with history that stretches back to ancient times. And secondly, it’s a city that has made its fortunes through maritime trade. That’s why it comes as no surprise to find out that the city’s tallest landmark – the CMA-CGM Tower is the headquarters of the world’s third largest container sea transport company.

When the CMA-CGM Tower was first planned in 2004, it was a project designed to transform the skyline of the city. The site and size of the building were never up for discussion. It had to be big enough to provide office space for the two thousand employees of CMA-CGM shipping corporation, who were at that time spread out over seven sites. What’s more, it had to be built on the exact spot where the company was founded by Jacques Saadé in 1978 – a site with view over the mountains and the sea in the business district of Euromediterranée.

The prize-winning London-based architect, Zaha Hadid won the commission to design the building and it bears her characteristic hallmark in its daring geometrical design. The tower’s angled vertical lines and gently curving base give it a unique form that make it seem as it has been gently torn apart. As construction progressed and the tower started to take form, locals marvelled at its height that rivalled that of the basilica of Notre Dame de La Garde, another of the city’s landmarks. 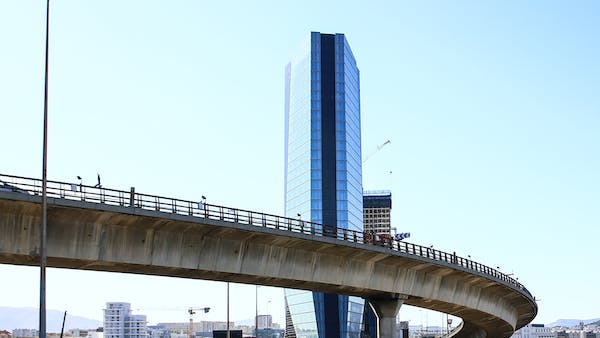 Seven years later when it was finally completed, architecture lovers flocked to Marseilles to admire the city’s first skyscraper describing it as “revolutionary”, “elegant” and “fluid”. Hadid herself described the buildings as “Rising in a metallic curving arc that slowly lifts and accelerates skywards into the dramatic vertical geometry of its revolutionary forms.” Whatever adjectives are used, there’s no getting away from the fact that this is a stunning building that refuses to be overlooked.

Building a building of this height in the heat of the south of France came with its own set of challenges. The glass façade is the largest surface of the building and had to consider both the merciless Mediterranean

One of the ways this was solved was with the use of ventilated façade insulation cladding. This is often used in warmer climates as it improves heat regulation and  maintains the ambient temperature inside the building. The CMA-CGM Tower uses Rockfaçade, a natural stone wool product that can help prevent water damage and protect against mould by ensuring any rainwater drains away to protect the inner layer of the building.

Once installed Rockfaçade contributes to energy savings by reducing ventilation costs. This reduces the building’s carbon footprint, which fits closely with the company’s focus on sustainable globalization and solutions that are respectful of the planet and our natural environment.

Alongside the many benefits for indoor climate, the ventilated facade offers exceptional protection against fire. As a material, it is non-combustible and can withstand temperatures of over 1000°C without melting. These outstanding properties have earnt Rockfaçade an A1 rating in the European Reaction to Fire classification – the highest possible rating.

Interacting with its surroundings

Zaha Hadid’s architectural design was also concerned with the way the building interacted with the space around it. The CMA-CGM Tower is located on a busy site, nestled between two elevated motorways that pass the base of the tower on two sides, with pedestrian access to public transport serving the district right next to the tower. The Tower reflects this activity at ground level by being wider in the lower section of the building to reflect the horizontal energy of people and transport in this part of the city.

Alongside looking like it was designed to fit into its surroundings, the building itself contains numerous references to the activities of the company – from its resemblance to a ship’s prow, to the glass façade in white and silver that echoes the reflection of the sea. At the very top of the building, a container has been placed to show the core activity of the company. Closer to the ground, in front of the building, passersby can enjoy the artwork by Scottish artist David March “takes two to tango”– showing two sumo wrestlers lifting a shipping container.

The CMA-CGM Tower has now been in use for over a decade. The 33 floors and 94,000m2 of office space in the tower and the adjoining annex buzz with life and the business activities of keeping containers moving around the world. And in addition to office space, the employees also enjoy a covered car park, an 800-seat restaurant, a gym and an auditorium.

Residents of Marseille have now grown used to the CMA-CGM Tower standing proud on the city skyline. It might not be able to boast the long history of some of the other of Marseille’s landmarks, such as the Basilica of Notre-Dame-de-la-Garde, but it injects a sense of modern dynamism to the cityscape and represents another chapter in the city’s long history with the sea