With Europe sweltering in a heatwave and rivers reaching record low levels, it’s easy to think that climate change is just about global warming. However, alongside droughts and high temperatures, changing global weather systems are also causing excessive rainfall. In the Frederiksberg district of Greater Copenhagen, the Langelands Plads square has met this challenge with innovative solutions designed to protect against excessive downpour.

This square was one of the areas that was underwater following one of the most extreme weather events in Denmark in recent years. On the 2nd July 2011, the heavens opened and 100 mm of rain fell in just two hours causing more than EUR 1 billion in damage. Water flowed through the streets at depths of up to 50 cm and residents and workers looked on in horror as buildings, cars, roads and infrastructure became submerged.

This kind of downpour – also known as a cloudburst – forced the city planners to speed up their plans for flood protection in the city and consider new innovative ways to stop this kind of weather event having the same devastating consequences. 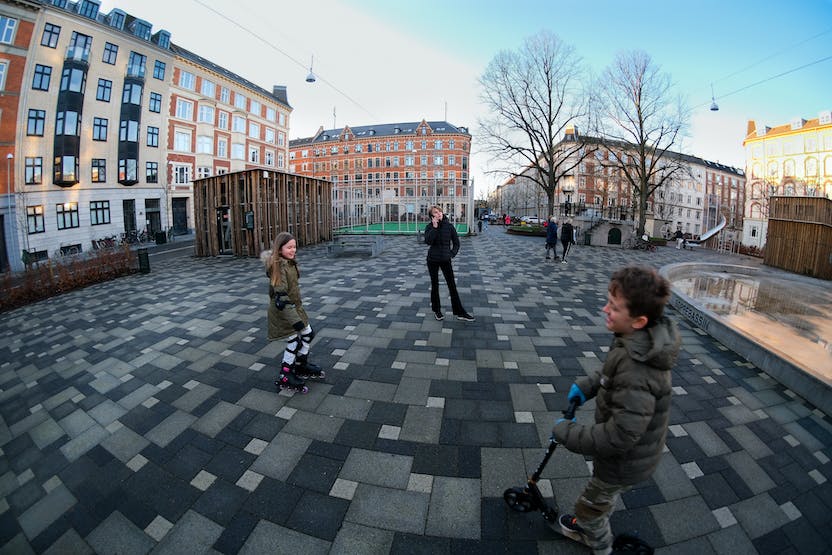 The problem with sewer systems

In the past, it was thought that the best way to deal with excessive rainfall was to make the sewers absorb the water faster and transport it quickly to the harbour. However, in a city like Copenhagen, where the sewers are close to 200 years old, updating them to manage this kind of intense downpour would not just be eye-wateringly expensive but it would also cause intense and long-lasting disruption for residents and businesses. Instead, the city developed a rainfall management plan based on solutions that would retain the water and prevent it from overflowing the sewers.

In 2019, plans were made to build an underground parking garage in Langelands Plads square that would remove cars from street level. This project gave the council the opportunity they needed to test out some climate protection measures from their rainfall management plan Firstly, they built large water basins above ground to capture rainwater and secondly, under the square they installed a Rockflow stone wool buffer.

The absorbency of a sponge with the strength of stone

Large water basins are self-explanatory, but a stone wool buffer like Rockflow, was new to many people. In short, it’s specially engineered stone wool that can absorb an incredible 95 percent of its own volume in water – just like a sponge. This water is then gradually released over a period of 24-hours into the surrounding soil or sewer system. This makes it ideal for urban areas with lots of asphalt, inadequate sewer systems and limited areas for water absorption.

Until recently, stone wool buffers have been hampered by problems, such as a limited load-bearing ability, which have severely restricted the situations in which they could be used. Rockflow is innovative because it has been engineered to support the weight of cars and pedestrians. This means it can be used pretty much everywhere – even under busy roads. 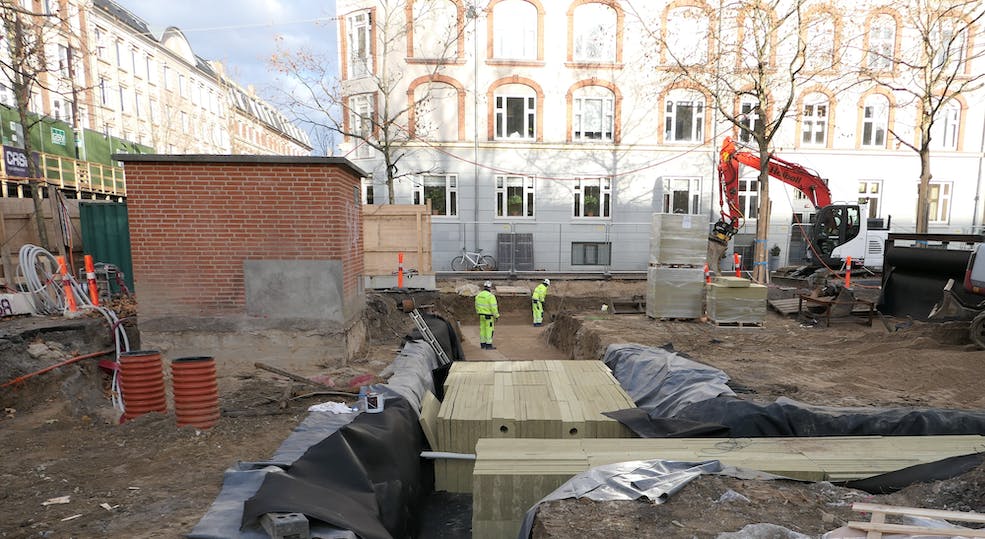 The builders involved in this project had some reservations about how they could get Rockflow to fit with the rounded corners of the square. But as soon as they started working with this material, their reservations disappeared.  Not only is Rockflow lightweight, but it can be easily cut and used in even the most difficult corners where traditional drainage measures would never be possible. It was also easy to fit around existing underground infrastructure like cables and piping.

Rockflow has been used successfully in over 40 locations in Denmark and the Netherlands and is gaining a solid reputation within urban climate protection infrastructure. Its load-bearing properties and flexibility means it can be used under any surface. This has made it an architect’s dream when it comes to creating exciting outdoor multipurpose spaces.

Thomas Kähler, Senior VP, Head of Systems Division at ROCKWOOL Group explains its popularity,“Rockflow gives urban areas a new and cost efficient tool to manage the increasing risk of floods due to sudden heavy rainfall. It helps channel the excess water to the underground Rockflow buffer and thus away from sewer systems so communities can keep their businesses, public squares, parks, playgrounds and homes dry.”

Today if you asked anyone walking through Langeland Square about its flood protection measures, they would probably point to the very visible water basins. However, right under their feet, Rockflow is invisibly working hard to protect the buildings of the square, so if there is a repeat of the 2011 cloudburst, residents and businesses will just experience the drama of the downpour without the devastation.