What is the most recognisable part of the foiling F50 boat, raced by the world’s best athletes in SailGP?

But, for many, it’s the carbon-fibre wing sail, which stands some 50 feet above the sailors, helping them to hit speeds of 100 kilometres per hour in some of the most iconic sailing spots on the planet.

With its hydraulics and data sensors, it looks more like an upright airplane wing or a NASA breakthrough than a traditional sail – and the design of the SailGP F50 wing sail is something unique in the sailing world.

Controlling it is tough, mastering it can take years of experience. And, as we embark on Season 2 of the global racing league, the complexity of the wing sails that propel these machines to hit such thrilling speeds, powered only by the wind, just went up another gear.

Why? After all, it’s a pretty simple equation, right? The larger the sail area, the more power the sail can harness from the wind, so faster speeds. Well, in theory, that’s correct.

But it’s a balance. If the wind is too strong, and the sail area too large, the boat can become overpowered – and even capsize.

So, for the SailGP athletes, it’s a careful calculation based on expert knowledge of the wing sails and combined with a solid level of expertise on the local conditions, and forecasts. 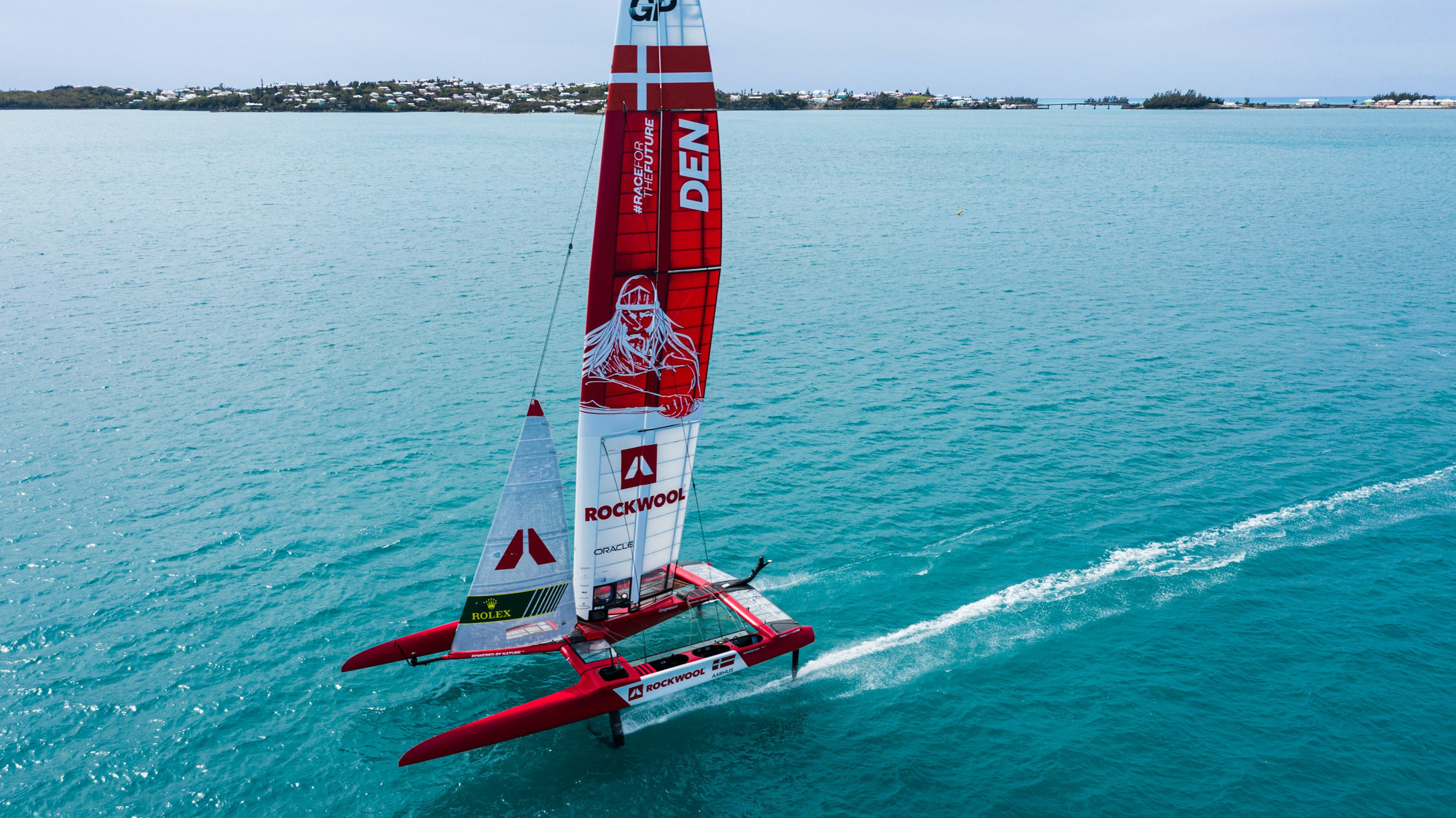 The original, 24-metre tall wing sails that were a key part of the SailGP F50s from launch were perfectly fine for racing in lower winds. But as the breeze increases, their larger size means that sailing with them becomes something of a riskier proposition.

So, ahead of Season 2, SailGP introduced a new sized sail – the 18-metre version – which provides teams a smaller wing to be used in stronger breeze, thus increasing the range of conditions that the F50s can race in.

Opting for the 18-metre wing sail in high winds means less surface area and less drag – so although the sail area is smaller, you don’t need as much wind to power the boat. It’s also lighter, which provides extra benefits when it comes to hitting insane speeds.

Another practical upshot for SailGP is that the increased range of tools means that there’s less chance of races being called off due to the extreme weather, and ensures better and more competitive racing in both high and low wind conditions.

“I think the coolest thing about the F50 wing sail is the sheer amount of power you can create from it,” says Tom Johnson, wing trimmer on Denmark SailGP Team presented by ROCKWOOL.

“It’s kind of like flying an airplane with a single button press – I probably have enough power at my fingertips to launch a 737.”

He continues: “But it’s not just about power, it’s also about control, and once you’ve got your head around it, you can really manipulate this wing with the camber and twist controls.” 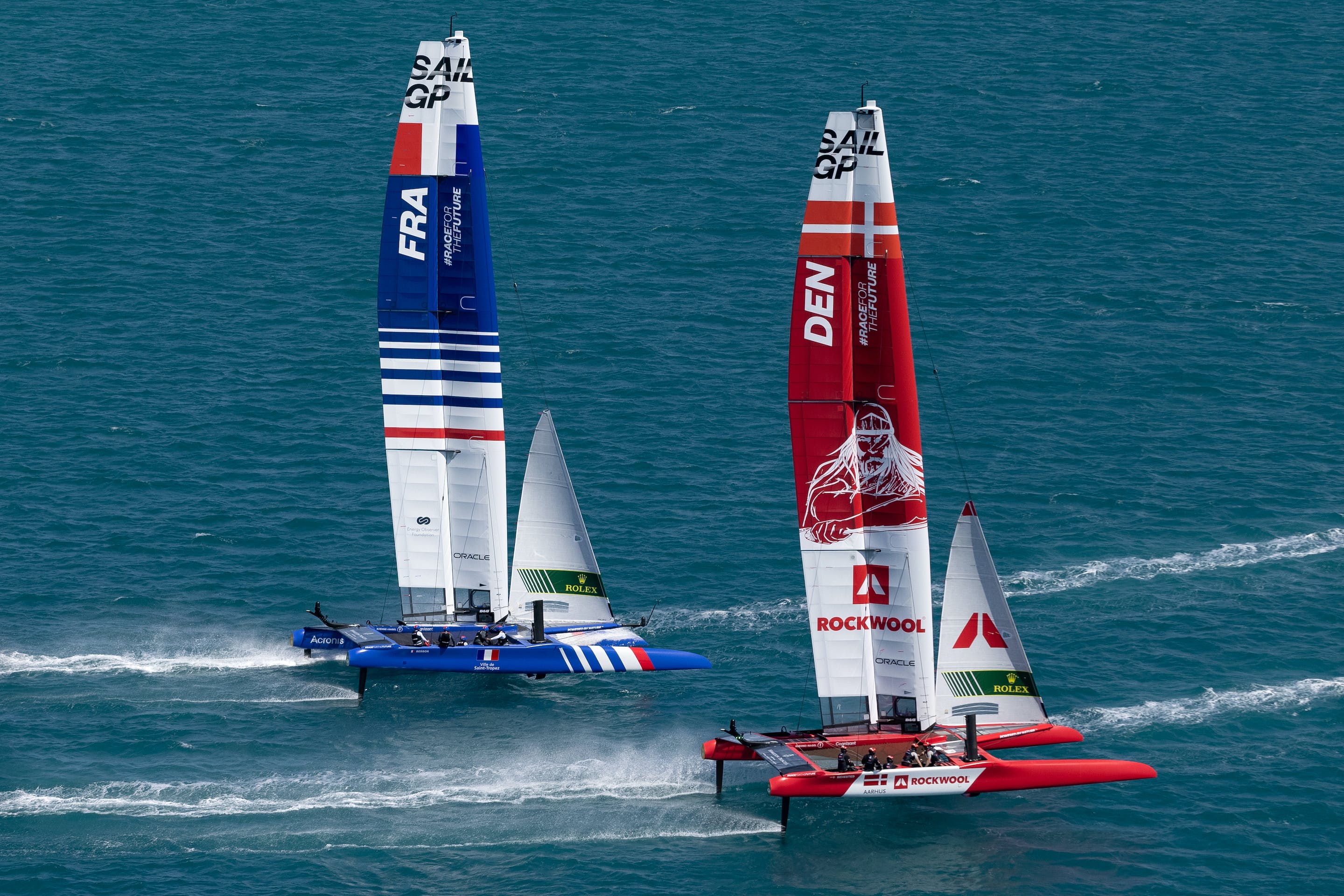 ‘Camber’ refers to the fullness, or depth, of the sail, whereas ‘twist’ is exactly what you’d expect – changing the angle from the top to the bottom of the sail. The wing sail also features a slots and flaps which can help the trimmer to tweak the shape and angle further.

“In some ways, it’s similar to the Drag Reduction System (DRS) used in Formula 1,” explains Tom. “It allows us to manipulate individual elements of the sail to greater accuracy, reducing drag in specific conditions.”

To truly master these state-of-the-art foiling boats, customisation is key. Just as the foils and rudders can be adjusted depending on conditions, the wing is now similarly customisable.

But the wing sail isn’t just about powering the boat. Johnson explains that it also acts as a ‘living organism’, with each F50 featuring 30,000 live data points – many on the wing sail itself – and each structure also housing an analytics display that the sailors can use for data-driven decision making during racing.

“The level and power of data we can access on the F50 is crazy,” he continues. “Using a traditional soft sail, it’s hard to see what the other teams are doing, but with the wing sail, there are sensors in the masthead at the top which tell you everything – twist percentage, camber, mast rotation and apparent wind angle.”

He continues: “As a wing trimmer, I’m constantly using the wing display and my other display in the cockpit to read and stay ahead of the numbers. It’s an extension of me – it’s important that you continue to trust your ‘feel’ rather than just the numbers, as most of the time, if it feels wrong, it is.

“The sweet spot is where the boat feels good, and you check the numbers and they correlate – then you realise it goes hand in hand.”

All of the data recorded from the boats is made available for the teams, which keeps the level of racing in SailGP so high. And, thanks to the Oracle Cloud, spectators are also able to access the data via the SailGP app and track real-time performance insights from their favourite boats.

“It’s really exciting to think about the possibilities,” adds Tom. “Right now, we’re reliant on a crane to put the wing sail ‘in’ – and the modular wing set up is a huge step forward, as it means that we can adapt quickly to the conditions with either a small, medium or large wing.

“SailGP is exploring introducing a 28-metre wing which would give us even more surface area and power for light wind situations, and, combined with the light foils, it would allow us to hit unreal speeds in previously unmanageable conditions.”

He continues: “Right now, it’s all about what we call ‘computational flow dynamics’ – or CFD – modelling. That enables us to predict how a wing sail will perform using only a computer, without even the need to build a prototype.

“As that technology improves, and the design of the wing sail evolves, we will see boats going faster, for more of the time.”

Singapore has gained a reputation as one of the worst plastic offenders per capita on the planet, so we're here to discover if that's true, and if so - what are they doing about it?

Chasing a dream – Risking everything to renovate an abandoned hotel

When builder Bryan Baeumler stumbled upon a decaying and abandoned resort on the tropical island of St. Andros in the Bahamas, he was compelled to quit his cosy life in Canada and transform the ruin into a luxury escape. His top priority when revitalising the dilapidated resort was to renovate in the most sustainable way possible, with true respect for its island location. But how could this be done?

Would you let an artist paint the side of your house?

In the city of Taranto in the south of Italy, whether or not to let a street artist loose on the side of your home has now become an avid discussion among locals. The street art project T.R.U.St., Taranto Regeneration Urban Street, aims to transform Taranto into an open-air art museum and bring art to the people – quite literally to the sides of their homes.