Tune in to SailGP Season 2 and you’d be forgiven for thinking that your eyes are deceiving you.

Eight identical, supercharged boats flying above the water and hitting speeds of up to 100 kilometres per hour – it’s definitely sailing… but perhaps not as you have ever seen it before.

Since its inception in 2019, SailGP has fast become the pinnacle event in the sailing calendar – but this global racing league is more akin to Formula 1 on water than traditional sailboat racing, with athletes who resemble fighter pilots rather than the salt-soaked adventurers of the past.

And the flying F50 catamarans raced by the world’s best sailors showcase one of the major modern breakthroughs in the sport of sailing – foiling technology.

So, what is foiling, how does it work, and when did sailing become so… cool?

The concept of hydrofoils comes down to simple physics, and specifically, Newton’s 3rd Law – ‘for every action, there is an equal and opposite reaction’.

Hydrofoils work in a similar way to airplane wings, in that, as they cut through the water, they create a pressure difference above and below the foil. If the greater force is upward, the faster the boat moves, and the greater the lift.

One benefit of hydrofoils is that they can be much smaller than airplane wings due to the fact that water is almost 800 times denser than air. The F50 catamaran foils have far more to ‘push against’, so they require much less surface area – and the increased density of water means that the hydrofoils don’t have to move anywhere near as fast as a plane before creating lift.

And, by lifting the boat out of the water, drag from the hull is significantly reduced, allowing boats to hit previously-unheard-of speeds. On the F50 boats, the wingsail acts as the engine – a third foil – adding further lift and forward propulsion. 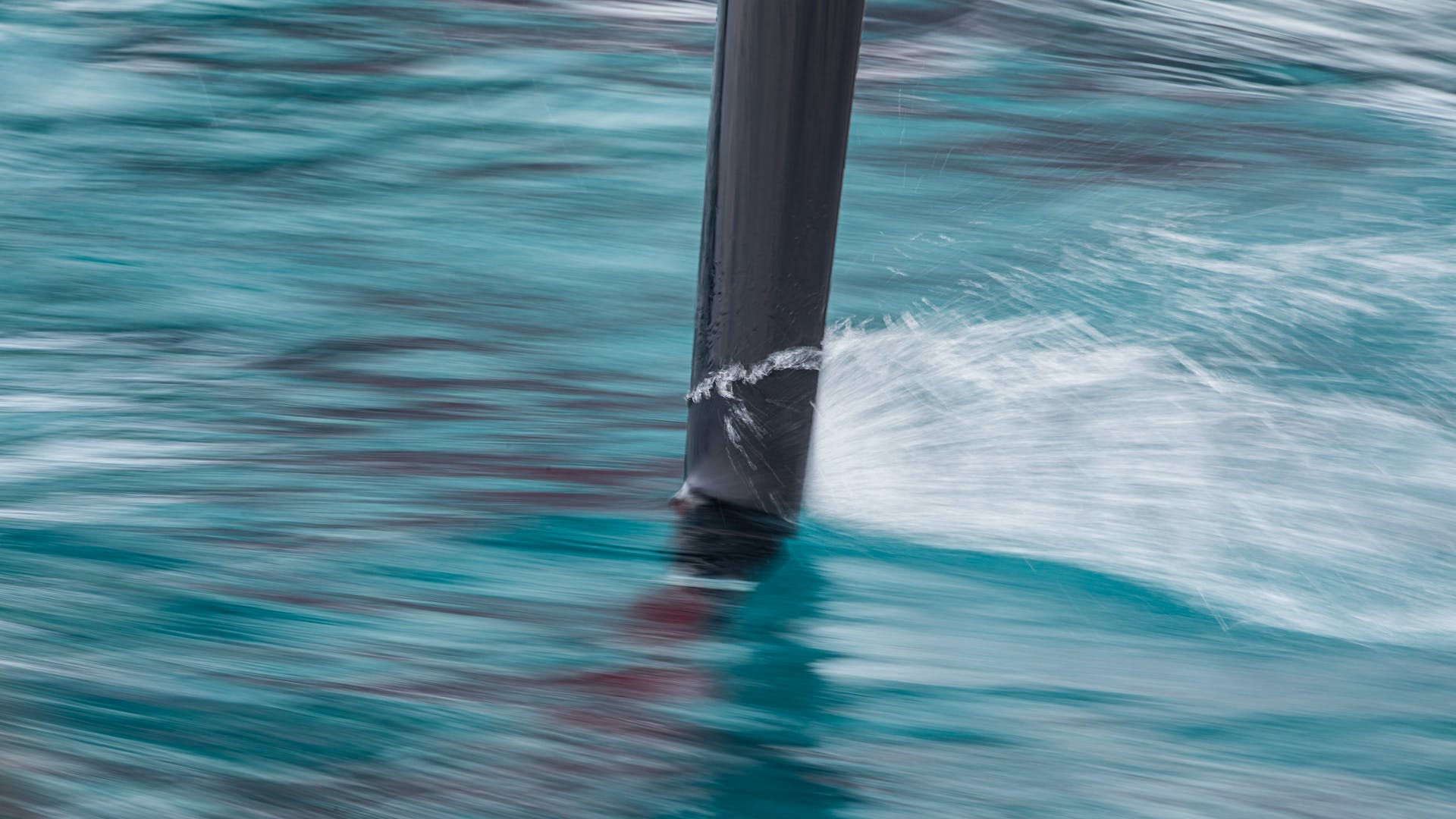 Image: Close-up of the F50 hydrofoils at speed.

It's all about drag

“If you look at something like the airline industry, it’s actually very simple compared to achieving ‘flight’ with one of these boats,” said Renato Conde, Denmark SailGP Team shore crew.

“You take off, you hit 800 km/hour, and that’s about it – the shape of the wings and technology hasn’t really changed for years.” 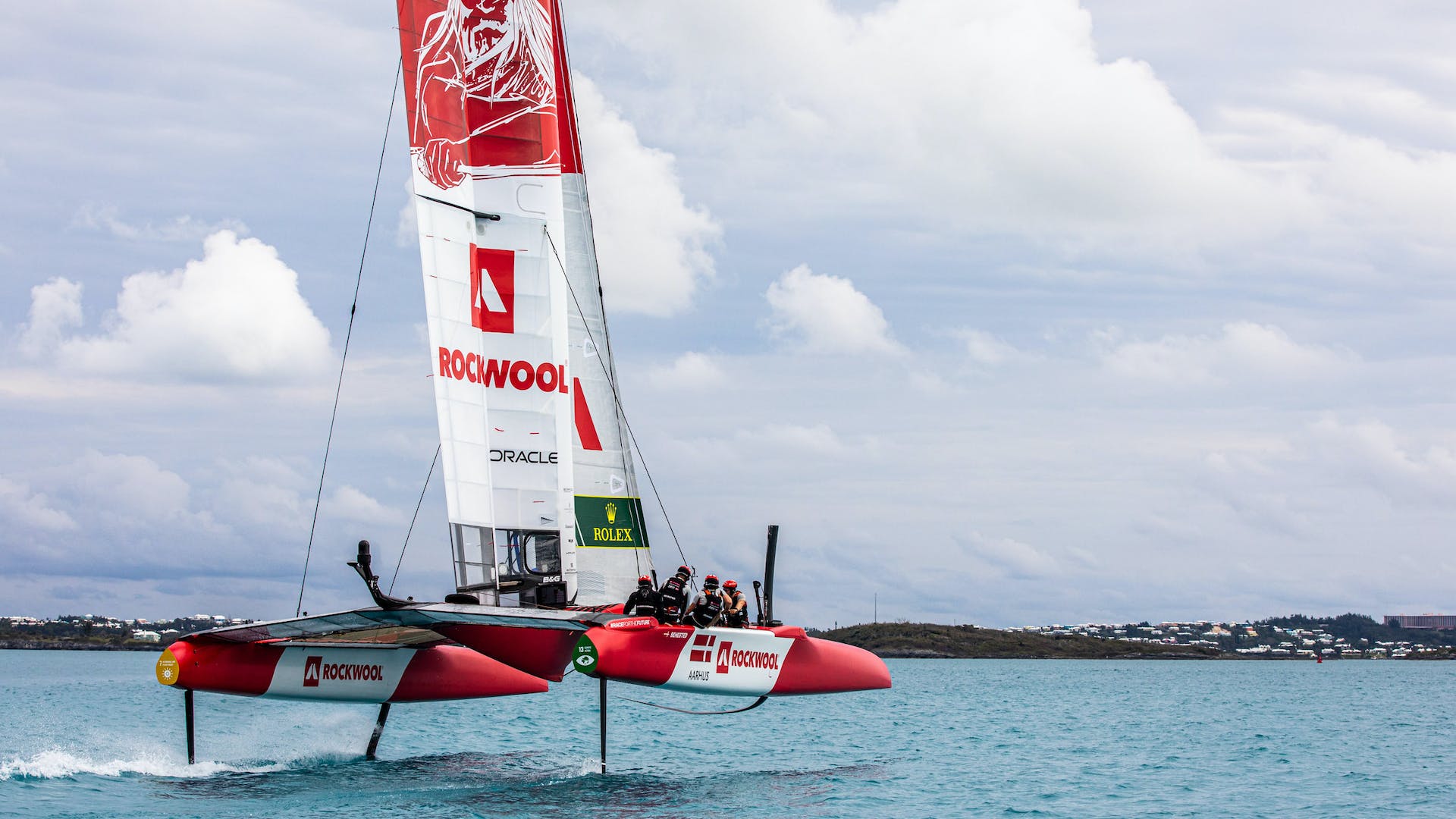 At the top-end of the F50’s speed range, in the region of 50 knots, the water begins to boil and bubble around the carbon-fibre foils – this is a phenomenon known as ‘cavitation’.

Even if you don’t recognise the term, you’ve probably seen cavitation in action – it’s the small steam bubbles that rise behind a boat’s propeller as it moves through the water.

As the foil moves through the water, the low pressure generated creates an isolated bubble, and the water around the foil turns from liquid to vapour.

As this happens, the density drops by almost 800 times, and it becomes more difficult for the foil to ‘grip’ – this is a problem in terms of both stability, and speed, as it dramatically affects the athletes’ ability to fly the boat efficiently.

But when cavitation is avoided, the foils provide unrivalled efficiency and thrust – and once you get going, you create your own momentum. It’s kind of like a snowball effect.

The story behind hydrofoils

Indeed, these state-of-the-art F50s have already topped the 50-knot speed barrier, and, every day, sailors around the world are pushing the limits of physics with gravity-defying stunts and superhuman speeds.

But whilst the foiling phenomenon has revolutionised high-performance sailing over the past decade, the roots of foiling are not new. In fact, the earliest examples of the technology can be traced back over a century, to the late 1800s.

The first patent for a boat designed to go faster due to reduced water resistance was registered by French inventor Emmanuel Denis Farcot on 3 December 1869 – and on that day, the concept of the hydrofoil was born.

But the earliest pioneers of the technology didn’t make a significant breakthrough until the early 1900s, when Italian engineer Enrico Forlanini unveiled his full-scale prototype featuring a ladder system of foils, and hit a top speed of 68 kilometres per hour during testing on Lake Maggiore in 1906.

The breakthrough was deemed so innovative that several iconic engineers including the Wright brothers, who flew the first airplane, and Alexander Graham-Bell, the inventor of the telephone, went on to explore the technology themselves over the following two decades, with Graham-Bell’s HD-4 watercraft design setting a new speed record of 114 km/h in 1919.

In the 100 years following that landmark moment, flying ships have faded in and out of fashion – finding a niche in military passenger vehicles during the Second World War – but the vulnerability and expense of the foiling technology makes commercial use a challenge.

It wasn’t until the 1970s, when David Kepier sailed some 20,000 miles in his hydrofoil trimaran, that foils for racing yachts began to be taken seriously once again.

So, if the future is foiling, what’s next for the sport’s boldest pioneers? According to Conde, the next sailing ‘sound barrier’ has already been set.

“We’re seeing the next innovation in foiling is all about customisation,” adds Conde.

“The more you can tailor the surface area of the foil boards and the wingsail to the absolute minimum you need to achieve flight, you will go significantly faster.”

He continues: “It’s not a one-size-fits-all solution, and one set of foil boards won’t work perfectly in both light and heavy breeze, there will always be a compromise. You have to set your priority.”

“In SailGP, I’m excited about the future of this technology – and I’d like to see what I like to call ‘extreme’ foil boards.

“With these slimmer, ‘extreme’ boards, you could limit the surface area in the water too, and with that we’d see speeds increase towards the 60-knot barrier significantly. The technology and design for that already exists, we just need to adapt it.”

Chasing a dream – Risking everything to renovate an abandoned hotel

When builder Bryan Baeumler stumbled upon a decaying and abandoned resort on the tropical island of St. Andros in the Bahamas, he was compelled to quit his cosy life in Canada and transform the ruin into a luxury escape. His top priority when revitalising the dilapidated resort was to renovate in the most sustainable way possible, with true respect for its island location. But how could this be done?

Taranto, and other parts of the southern region, has long suffered from brain drain. But can the renovation wave that is currently sailing through Italy help reverse this trend and breathe new life into this once charming city?