When it comes to getting the absolute best out of their F50 foiling catamarans the SailGP crews all know the importance of maintaining smooth flow over both their foils and the sails.

If you’ve watched a SailGP racing, you’ve probably heard of ‘cavitation’ – a phenomenon that threatens and frustrates even the world’s best sailors.

But what is it? Well, it sounds complicated – but it’s actually quite a simple concept.

It’s all about pressure, and the boiling point of water changes depending on the pressure it’s under. That’s why pressure cookers make cooking more efficient.

Whether you realised it or not, you’ve probably seen cavitation in action. Those bubbles that rise to the surface behind a moving boat are just that.

But what is really happening when cavitation occurs, and why is it such a headache for SailGP athletes?

Designed to fly through the air on hydrofoils rather than sail through the water like regular boats, SailGP’s F50 foiling catamarans are spectacularly fast, with a current top speed of almost 100 kilometres per hour (km/hr).

However, although they are unaffected by the slowing effect of water drag on their hulls, the upper limit of their performance is determined by another hydrodynamic phenomenon known as ‘cavitation’.

Cavitation is a well known concept for designers of anything with fast moving water blades – like propellers or hydrofoils – and describes the formation of air bubbles or cavities in water when it passes over such an appendage at high speed.

In these situations, the difference in pressure can be significant from one side of the blade to the other, that the water begins to boil, forming a pocket of air that dramatically affects its hydrodynamic efficiency.

Onboard, the sailors know instantly when they reach cavitation speed, as the boat slows down and the whole platform starts to shudder and shake as the foil struggles to generate lift from the vapourised water surrounding it.

The Denmark F50 cutting through the water creating spray.

According to Nicolai Sehested, driver of the Denmark SailGP Team presented by ROCKWOOL, the onboard experience of cavitation is akin to “driving on a dirt road strewn with rocks”.

“When cavitation occurs the disturbed flow over the foil means the boat becomes harder to control,” Sehested explains. “When you turn the rudder – not much happens.”

That’s a worrying prospect, given that the most likely part of the racecourse for the cews to experience cavitation is at the end of the first reaching leg, when the boats reach peak speed – at times, close to 100 km/hr – as they make the all-important first turn, of each SailGP race

“At that point, you actually can’t do anything about it,” Sehested says.

“You just have to hope that you have enough control to turn the boat downwind. Then the speed will slowly drop off and the foils will recreate their traction again.”

Although cavitation – which occurs first on the F50s main foils but can happen on the rudders too – cannot ever be eliminated, there are ways of delaying its onset.

Firstly, the hydrofoil’s surface area plays a significant role in determining when cavitation begins. SailGP crews start to experience it at speeds of 75 km/hr when sailing on the F50’s larger foils (used in light to medium winds), and at around 85 km/ph with the smaller stronger-wind foils. 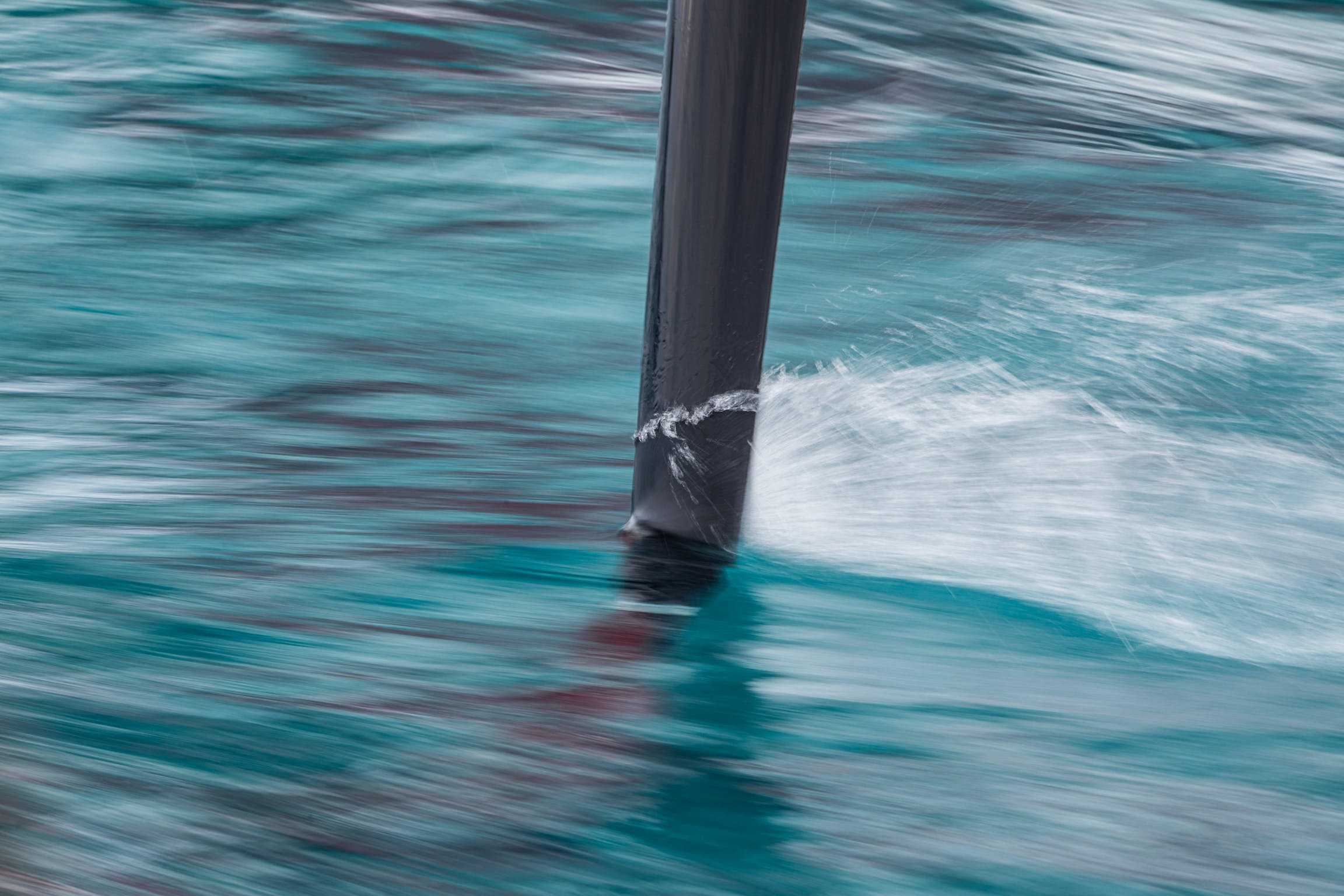 A close-up of the foils on the F50 catamaran.

“There’s a trade off between foil size and cavitation,” Sehested comments.

“The smaller the foils you are using, the faster you can go before you reach boiling point. If you could wave a magic wand you would have large foils for take-off and then instantly switch to small ones once you are up and running. Then you would get even higher top speeds.”

The other factor which affects when a foil cavitates is the condition of its surface, which the teams’ shore crews must keep free of cracks and other imperfections to avoid triggering turbulence, leading to cavitation.

This process takes place religiously every time the boat comes out of the water – and the foil even undergoes an ultrasound to spot any stress fractures, otherwise invisible to the naked eye.

“A foil that is not perfectly looked after in terms of sanding and fairing could cavitate quicker because any blemishes can cause uneven water flow and that creates a higher pressure difference more quickly,” says Sehested.

The new T-shaped foils scheduled to be fitted to the SailGP F50 fleet during 2023 include smaller surface area wings that are made from titanium – a material that is both strong and light and highly resistant to surface damage.

As well as providing more righting moment – the opposing force from the lift of the foils that counteracts the tipping force generated by the sails and keeps the boat upright – it is expected that the superior new foils’ superior surface quality will delay cavitation.

“Because the T-foil extends outside the boat it generates more righting moment – which means more power for us to sail faster,” Sehested commented. “Then, because they are smaller foils with a more perfect surface we should reach higher speeds before they reach the cavitation point.” 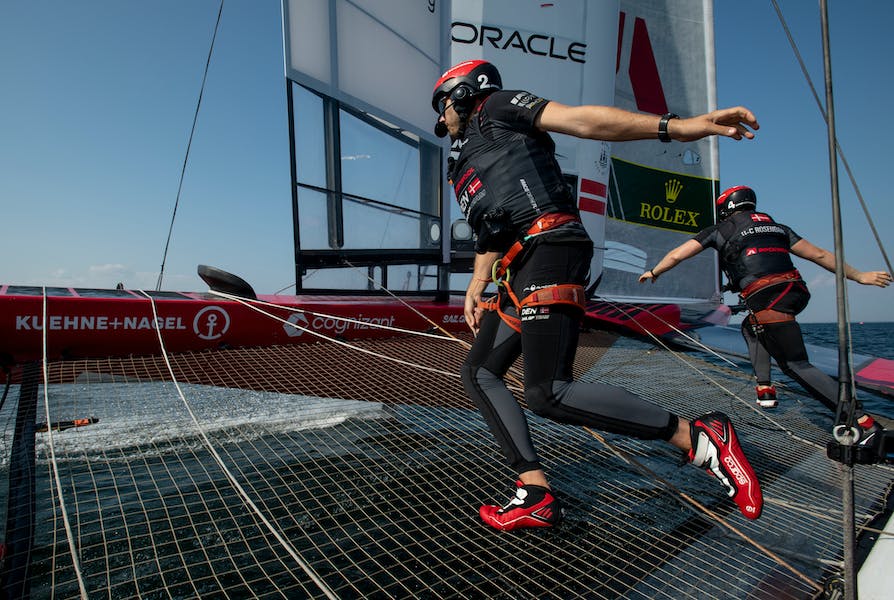 The Denmark SailGP Team athletes crossing the boat at high speeds during a tack.

While cavitation takes place around the F50s underwater appendages, up in the air, the boats’ towering wingsails are not immune from the effects of turbulent flow.

In sailing, the term ‘dirty air’ relates to the swirling vortices (circular patterns of rotating air) that spin off the back edge of a yacht’s sails as it moves along. In the same way that water cavitation reduces the efficiency of the foils and slows the boat, sailing through dirty air makes it difficult for a sail to achieve optimal aerodynamic performance.

The F50 wings are no different in this respect, and – according to Sehested – dirty air from your competitors can have a dramatic effect on your performance numbers during racing.

“This is something I think the teams will really be focusing in on over coming seasons,” he said.

“When we blast across that first reach just after the start, the fleet creates a massive swathe of disturbed dirty air that then travels down the course.

“When you look at the data you can see a big drop in the boats’ upwind performance compared to when they sailed upwind before the race on a clear racecourse.”

Although the dirty air does eventually make its way past the downwind gate marks and off the course, by then more air disturbance is being caused by the teams as they race.

Like cavitation, there is little the sailors can do to prevent dirty air, but, finding a way to avoid the worst of it – along with making the best of windshifts and variations in velocity – can result in big gains and can often be what separates the leaderboard’s top crews from the rest.

Singapore has gained a reputation as one of the worst plastic offenders per capita on the planet, so we're here to discover if that's true, and if so - what are they doing about it?