The team, which will compete in the ETF26 foiling circuit, consists of SailGP athletes Katja Salskov-Iversen, Anne-Marie Rindom and Christian Peter Lübeck.

Increased opportunities for an expanded pool of Danish talent

The ROCK The Boat foiling initiative is the latest in a line of expanded talent development opportunities driven by Denmark SailGP Team and ROCKWOOL, in line with SailGP’s Race For The Future initiative.

It completes a comprehensive programme of foiling initiatives delivered by ROCKWOOL in Denmark and beyond, including Team ROCKWOOL Racing, which sees Denmark SailGP Team athletes compete in the GC32 Racing Tour, and the ROCK The Boat Academy, which aims to inspire the next generation of Danish sailors and will take place in Copenhagen in August around the ROCKWOOL Denmark Sail Grand Prix.

“I’m really excited about this opportunity to create our own diverse team, in a fun racing circuit like the ETF26,” says Salskov-Iversen.

“Having been part of the Denmark SailGP Team for more than a year, we know that the more time on the water in foiling boats, the better – and this is our chance to show that there is a depth of foiling talent and a bright future for the sport in Denmark.”

The ROCK The Boat team plans to race in at least three ETF26 Grand Prix this season, including Quiberon, France – plus Lake Garda, Italy in June and La Rochelle, France in September.

Salskov-Iversen and Rindom are well known to sports fans in Denmark, having both earned Olympic bronze medals at Rio 2016 and, more recently, Rindom securing gold at the Tokyo 2020 Games. They joined up with the Denmark SailGP Team as part of SailGP’s Race For The Future initiative following a female athlete selection camp in March 2021.

The pair has been integrated within SailGP for Season 2, and most recently, Salskov-Iversen has taken on the role of Tactician onboard the boat, which is capable of flying above the water and hitting speeds of up to 100 km/hr.

Rindom, who recently announced her intention to compete at the 2024 Olympic Games having secured Olympic victory in a dramatic final day of racing at Tokyo 2020, will be onboard the F50 in the upcoming United States Sail Grand Prix in Chicago Navy Pier on 18-19 June.

Rindom explains: “As an Olympic athlete, used to putting your whole focus into becoming the best you can be in one class, it can be a big challenge to move into a completely new type of boat – especially the SailGP F50, which is such a crazy machine.”

“Being able to race in a fun, foiling boat like the ETF26 will give us important hours and training opportunities and can only make us better sailors.” 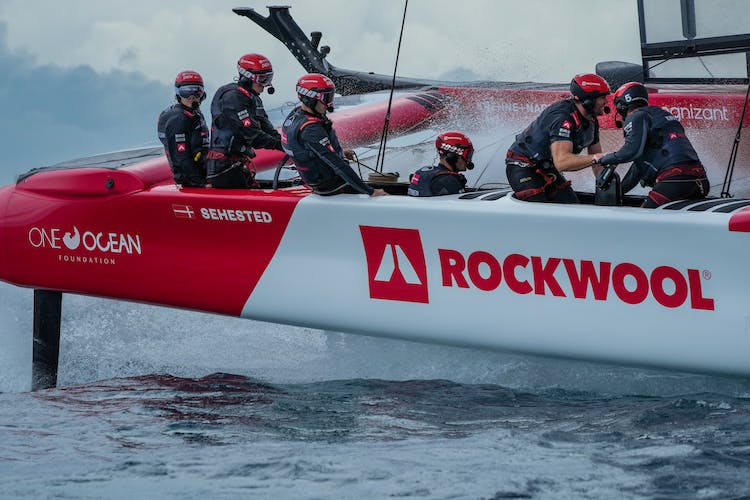 A new-look SailGP squad for Season 3

CP Lübeck, who has twice represented Denmark at the Olympic Games – in the 49er class in 2016 and the Nacra 17 class in 2020 – also joined up with the Denmark SailGP Team ahead of Season 3 last month.

Sehested said: “Since day one, we have been clear that this project has two ambitious aims – firstly, to win SailGP, and secondly, to develop the next generation of foiling athletes in Denmark.”

“I’m really excited that we are able to create this new ROCK The Boat initiative to add to our already busy and comprehensive on-water programme outside of SailGP, including Team ROCKWOOL Racing – and our ROCK The Boat academy initiatives which we have been successfully delivering around Denmark since 2020.”

He adds: “It’s thanks to ROCKWOOL’s support that we are able to deliver these valuable opportunities and equip Denmark’s SailGP athletes of the future with the experience and skill to keep flying the Danish flag at the top of the sport for a long time to come.”