As SailGP makes its final European stop for 2021 in Cádiz, Spain, we’ll take you on a tour to show you that there is much more to the city than sun, sea and sailing.

It’s not surprising that SailGP chose Cádiz to host their first ever event in Spain. Almost completely surrounded by water, Cádiz is located on a peninsula that juts out into the bay, making it ideal for the close-to-shore sailing action that SailGP is famous for. In fact, the city developed on this specific location due to its special relationship with the sea. Cádiz has always been an important hub on Spain’s appropriately named Costa de la Luz (the Coast of Light), with archaeological remains dating back as far as the 8th century BC. Founded by Phoenician traders as their first settlement in Europe, Cádiz was used as trading base for silver mined in the Rio Tinto mines. In Roman times, the dock was further developed as a naval base, and in the early 16th century, it became the port of departure to newly discovered Americas. So the city’s nautical connections have existed long before the SailGP crews flew in!

Its unique location lends an island-like atmosphere to the historic city centre, inviting tourists to wander through the narrow streets with sea spray on their faces and salt in their hair, the beach visible at almost every turn. The city’s past is recorded in buildings and monuments that were constructed in stone to commemorate events of great importance, standing the test of time. So let’s get out, learn more and explore the appealing city of Cádiz and its intriguing history captured in stone.

The road to liberalism

Where better to start the tour than at the Plaza de España, home to some of Cádiz’ most notable monuments. And let’s be honest, this square deserves a thorough tour of its own, as each monument was constructed to commemorate events of great importance to Cádiz.

Within the Plaza de España, each of the internal paths lead to the monument honouring the 1812 Constitution. Created in 1912, this impressive piece is the result of a collaboration between the architect, Modesto López Otero, and the sculptor, Aniceto Marinas García.

The Spanish Constitution of 1812

Throughout the early 19th century, Cádiz served as the stronghold for Spain's anti-monarchist, liberal movement. So it made sense that the country's first Constitution was declared in the city in 1812.

Often referred to as the Constitution of Cádiz or ‘La Pepa’, it was the first constitution of Spain and one of the earliest in the world. Defining Spanish and Spanish American liberalism for the early 19th century, its aim was to regenerate Spain through empowering local and provincial governments and opposing the traditional elites.

As a significant milestone in the history of Spain, its importance is reflected in the central monument at the Plaza de España. Erected in stone, this shrine to liberalism will last for centuries to come and educate and inspire future generations. 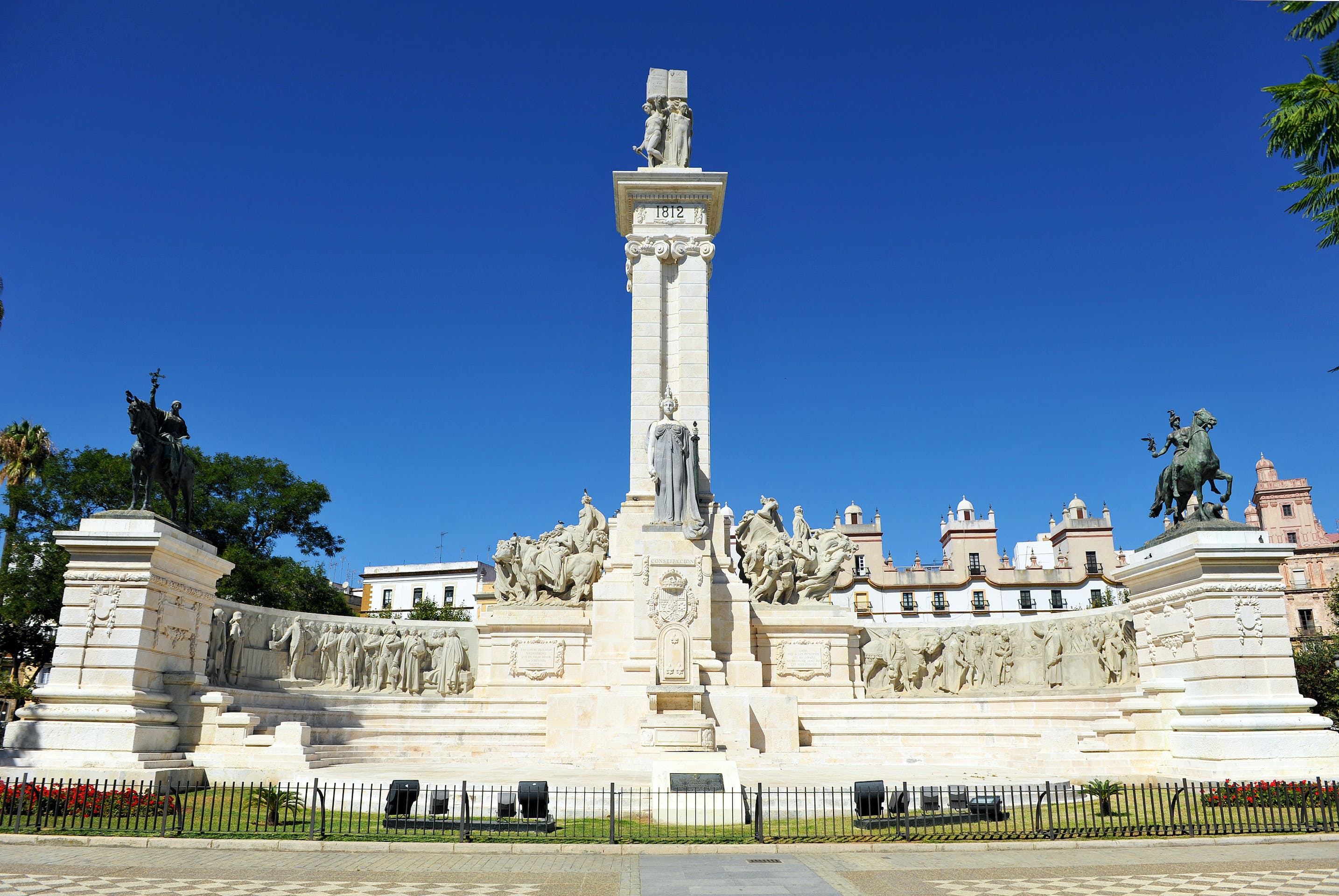 Representing a theatre stage, the monument hosts figures symbolising Spain, Hercules, war, peace, industry and agriculture. At its centre, female figures proudly raise the book of the 1812 Constitution. The entire piece looks towards the sea.

Two other sculptures were added to commemorate the second centennial of the Constitution in 2012. Known as the Antorchas de la Libertad, or Flames of Liberty, one stands in the Plaza de la Hispanidad and the other in the Plaza de Sevilla, and both are directly visible from the 1812 Constitution memorial.

Although there is no doubt that the monument to the 1812 Constitution is the highlight of the Plaza de España, there are many other stunning pieces worth visiting. But we have a busy day ahead, so it is time to weave our way through the honeycomb streets of the Barrio del Pópulo toward the Ayumtamiento.

Overlooking the Plaza San Juan de Dios, the Ayumtamiento was constructed on the foundations of earlier city halls in two stages – the first is considered to be the neoclassical phase and the second follows Isabelline style. Resembling the Parthenon of Ancient Greece, the classical style façade covers three storeys as well as the clock tower. The ground floor boasts Roman arches built in ostionera stone, and above it, a large balcony is supported by elegant, ionic columns. It was in front of this stately building that the flag of Andalusia was first raised in 1936.

Today, ostionera stone can still be purchased from local quarries. Although not used as often as it was in the past, it remains a characteristic part of local architecture in Cadiz and throughout Andalusia. 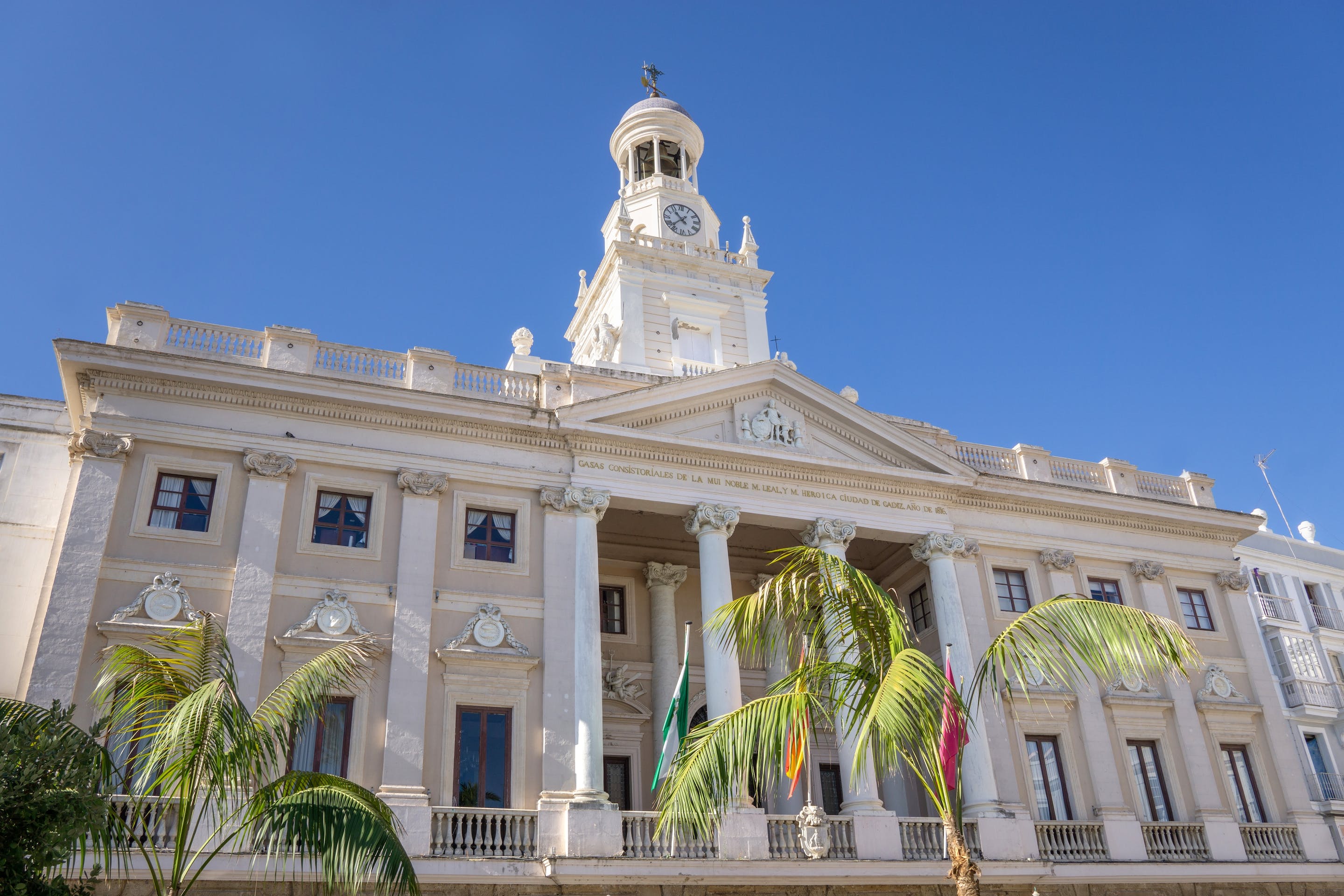 Leaving the Ayumtamiento and wandering through the Barrio del Pópulo to our next stop, it is fascinating to realise that there is a much older structure concealed beneath the oldest neighbourhood in Cádiz . In fact, no one knew that the Roman Theatre of Cádiz existed until 1980 – when a fire led to its discovery.

The Roman Theatre of Cádiz – or Theatrum Balbi – was built in circa 70 BC, and to this day remains just partially excavated. It is considered to be one of the oldest and largest in the Roman empire. The theatre includes a horseshoe-shaped cavea, or auditorium, that could host up to 20,000 spectators. The stage and portico behind the cavea have not been excavated, the ruins remaining hidden beneath the El Pópulo district.

The theatre was abandoned at the end of the third century, and served as a stone quarry for builders of the Moorish and Medieval periods. At one point, a Moorish alcazaba, or fort, was constructed on its ruins, and in the 13th century, this was replaced by a fortress ordered by King Alfonso X of Castile. This is partially how the theatre could remain hidden from the world for so many years. Although further excavations continue to take place, much of the theatre will remain in secret beneath the bustling Barrio del Pópulo.

The Cathedral of Cádiz 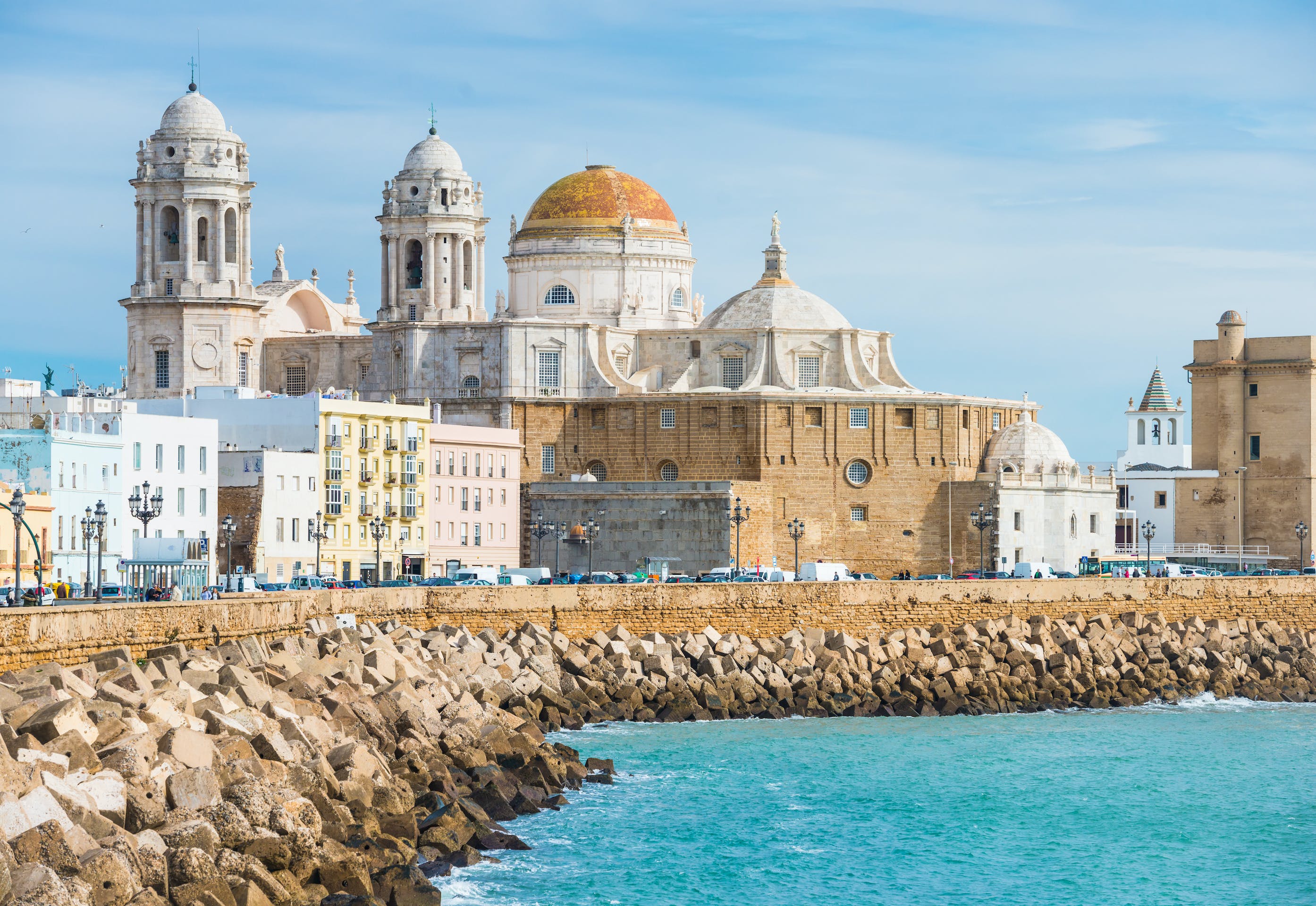 Just meters away from the Roman Theatre, we find the regal Cathedral of Cádiz. A true testimony to Cádiz’ golden age throughout the 18th century, the cathedral was built using money made from significant trade with the Americas. Taking an impressive 116 years to complete, construction started in 1722 in true baroque style, progressed to include rococo elements, and was completed in neoclassical style. The crypt serves as the final resting place for composer, Manuel de Falla, and the poet and play-write, José María Pemán, both born in Cádiz. As a final nod to Cádiz ’ golden years, the cathedral’s cupola is crowned with golden tiles.

The Torre de Poniente opened to the public in 2003 and has since become a beloved attraction for all tourists, offering 360-degree panoramic views of the city.

The natural strength of stone

Stone is one of the most abundant natural raw materials on Earth, with unique properties that make it perfect for constructing resilient buildings and monuments that stand the test of time.

The very fact that we can visit the ruins of a theatre built in Cadiz during Roman times is thanks to stone’s natural robustness and longevity. Since BC, civilisation has depended on the natural strength of stone for shelter and protection – and today, stone remains a vital raw material for modern living.

Learn more about the 7 Strengths of stone

All routes lead to the sea in Cadiz, and we continue our route towards the Campo Sur area to drink in the best views of the city and its beaches from the elevated promenade. Reminiscent of Cuba’s more famous malecón, our current Cádiz path is believed to be the original and the inspiration for the Caribbean version. The creamy pastel colours of the buildings in this area contrast starkly with the white houses of the city and muted brown of the ostionera stone city walls.

Ending at the popular city beach, Caleta beach, we remember that this is where everything started – at the natural port where the Phoenicians, the Romans and many more, first arrived at the city to shape its history in stone.

Every summer, the rich and famous flock to stunning Pampelonne beach to relax, recuperate and be seen in the hip beach bars that Saint Tropez is renowned for. But what if the beach bars disappeared at the season’s end? Could this give the beach itself a much-needed holiday from the holiday makers?

An apartment for less than the price of an espresso

While people in many parts of the world despair at the price of city centre property, in the Italian city of Taranto, apartments are going for the bargain price of just one euro ($1.20).