When a new underground infiltration system is installed, the load-bearing capacity of the material is often the subject that people have the most questions about. Understandable, because the primary goal of roads and soil is to support and carry the weight aboveground. An infiltration system under the ground must be strong and capable of carrying loads. Particularly in busy cities where traffic moves back and forth every day. Eyebrows are often raised when stone wool is suggested as a suitable option. This reaction is understandable, but unnecessary. Stone wool is strong and firm, almost as strong as stone.

Stone wool is made of basalt rock. In addition to being incredibly sustainable, it is also extremely strong. Since the separate stone fibres are pressed and knitted together, the material remains in one piece in its solid form. From the outside, stone wool may seem as soft as a sponge, but when any pressure is put upon the material, there is no deformation or denting. Stone wool is also used under railway lines which trains ride across every day; no light task, indeed, yet due to the powerful network of fibres, the material acts as a firm foundation. Large lorries, busses and cars are no problem at all.

Tools for the installation of a Rockflow attenuation system

As well as the fibres knitting to each other in the material itself, they also knit together with other pieces of stone wool. If the material is correctly installed as an infiltration system, it will not move from the correct position. When the fibres knit together, this causes a great deal of friction, just like velcro. This friction creates strength and stability. This means that the material remains in position, will not move and hence provides a good underlayer for built-up areas.

The advantages of stone wool

By choosing to install Rockflow, you also choose to make use of the many advantages the system brings. It requires no special equipment, provided you take into account the maximum axle and wheel loads indicated. Installation is often fast and easy because the elements are simple and flexible. The elements can also be adapted to the existing base layer. This makes Rockflow extremely suitable for applications in the built-up environment where it can be simply configured to avoid underground cables and pipes. 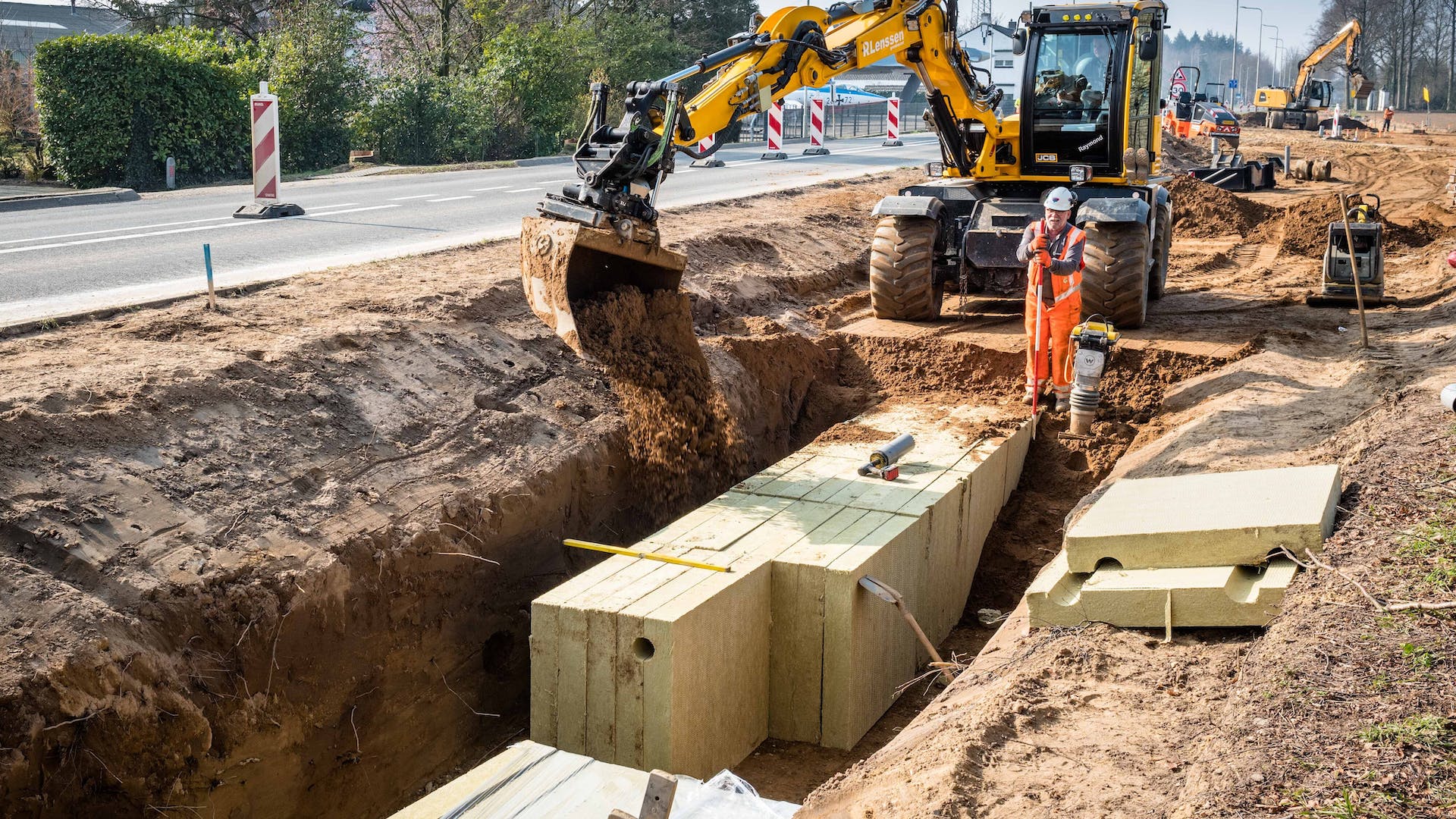 If you are going to start installing a Rockflow infiltration system, but you are not yet entirely sure of the correct steps for installation, then our manual gives you step-by-step instructions on how to install a Rockflow buffer.

This is how Rockflow works

Due to the fibre structure, the rock wool elements can absorb up to 95% of their own volume of water. Useful in places with limited space or a high groundwater level.

The Rockflow system is very flexible: with the separate elements you can create all kinds of shapes and make adjustments to accommodate unexpected elements.

Made of fully circular stone wool

Rockflow stone wool has a life span of more than 50 years. A Rockflow system can be well inspected during this long use phase and can be easily cleaned if necessary.

Get to know our urban climate adaptation solution through the stories behind a number of projects where Rockflow has been applied.

The FAQ gives you an overview with answers to the most frequently asked questions about Rockflow.

Questions? Get in touch with us:

Contact us if you are looking for more detailed information or if you have a question about Rockflow.

Are you planning to install a Rockflow attenuation and drainage system or do you have a question about manuals, technical drawings or other Rockflow requirements? Please contact our construction team.